What is Virtual Reality (VR) and how can it be used in the workplace?

What is Virtual Reality (VR) and how can it be used in the workplace?

Generally, when we think about VR we have ideas and a vision of people wearing headsets to play the latest video games.  But, VR has quietly gained a foothold over the past few years and is fast becoming a reality in the workplace. The Covid-19 pandemic has accelerated this process, making it possible to attend meetings, events, training sessions and seminars in a virtual world.

VR is the use of computer technology used to create a simulated environment. Unlike traditional user interfaces, VR places the user inside a ‘virtual world’ into a simulated experience. Users are immersed and can interact with 3D worlds and 3D people (Avatars). Another form of VR is Augmented Reality (AR) which we will touch on next.

So What’s the difference between Augmented Reality (AR) and VR?

AR starts with a camera-equipped device such as a smartphone, a tablet or smart glasses – loaded with AR software. When a user points the device and looks at an object, the software recognises it through computer vision technology, which analyzes the video stream. This type of technology is used by furniture suppliers such as IKEA where you can place virtual furniture in a room. 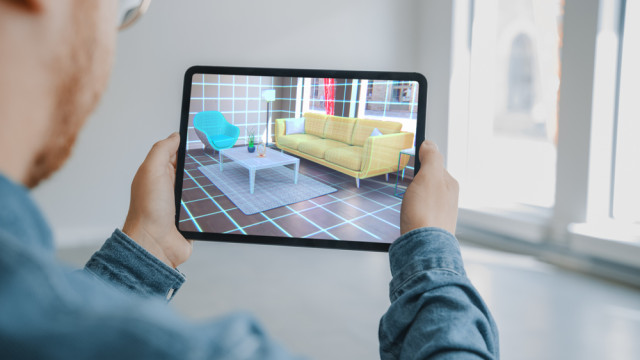 Another example of AR can be found via a simple Google search when using Google Chrome. Search for ‘Hedgehog’ and a link will appear inviting you to ‘Meet a life size hedgehog’. It should go without saying that a ‘life-size hedgehog’ appearing in your room isn’t where we are going with this but, it does introduce AR. Try it!

Although AR works on a consumer level by helping people to visualise products in their living space VR is better in a work setting due to its immersive and human interactive nature.

How can VR be used in the workplace?

1. Increased Connection and Collaboration is key in a VR world

VR allows people to come together and collaborate regardless of physical distance. However, unlike Zoom, Teams and all other ‘coming together’ platforms that we have been forced to embrace over the past eighteen months or so, VR users feel like they are physically sharing the same space resulting in more effective collaboration. VR can also be used for meetings and presentations by enabling users to share their work and data in real-time. The technology is easily accessible and intuitive, helping people across the world to connect and collaborate.

With effortless, global connectivity VR provides human resources and recruiting that can drastically be transformed. With access to potential colleagues across the world, hiring practices and recruitment will expand to make sure that top talent is being retained. VR offers recruiters an environment in which they can assess potential candidates much more effectively whilst eliminating travel costs.

The ability to put people into fully immersive real-life scenarios creates the perfect training environment. VR training is especially beneficial in high-risk situations because it allows people to gain experience safely. Both NASA and the military use VR training – minimising risk and costs. Companies such as UPS, KFC and Siemens have started using VR for their training programs.

4. Video Interviews may come to life via the use of VR

In this ‘new normal’, fast-paced digital world employers are probably paying less attention to academic grades and traditional CV’s printed on A4 paper. With VR, employers can turn up the heat by putting potential candidates through their paces in simulated scenarios to help them decide on who gets hired. This already sounds like a digital nightmare version of BBC2’s The Apprentice: You’re Fired but it’s happening now!

According to the Guardian, Lloyds Banking Group during their last recruitment campaign put its 400 candidates into virtual scenarios that they could face working at the bank. This was not your average high street bank though; this one was in a virtual Greek Temple!

By using this approach, the Lloyds recruiters could determine what the candidates would be like in a ‘real life’ scenario and make better decisions to suit each personality to their roles. Lisa Dell’Avvocato, Lloyds’ graduate and emerging-leadership development lead said:

“The more we allow candidates to reveal their natural strengths and behaviours, the more we can ensure that we align people to roles and teams where they will thrive”

The VR used by the bank, in this recruitment process attracted more graduates because they could see the potential in VR and wanted to be associated with a bank at the forefront of this exciting new technology.

Take a look at this video from Microsoft to show how people can meet in virtual reality through holoportation:

VR could really be a game-changer when it comes to supporting and assisting customer networks. By giving staff and customers a way to interact with each other, products and services you could gain a really good idea of what customers want. Companies at the forefront of VR technology who decide to use VR in their customer support strategy will be able to provide a first-class experience of service.

Long gone are the days when people need to turn up to an interview and sign the ‘duty’ visitors book placed on bespoke reception desks or carry out tasks in an office packed with rows of office desks and executive office chairs. VR is no longer destined to feature in the ‘workplace of the future because the future is already upon us. Covid -19 has already driven a record number of workers to work from home or remotely, so VR already has a captive audience. Additionally, VR headsets are now being aimed at consumers as Facebook (Meta) releases The Oculus Quest 2, at a starting price point of £299.00.

With more and more consumers getting to grips with this new technology it will only be a matter of time before we see headsets on the desks and heads of our colleagues. A PwC report last year predicted that nearly 23.5 million people worldwide would be using AR and VR by 2030 for training, work and meetings or to provide better customer service.

VR has the capabilities to recreate workplace scenarios and office like experiences. VR can bring remote teams together into a virtual space enabling effective remote collaboration on projects and presentations. As the technology evolves and VR avatar representations become more like the physical users, the gap between real and virtual realities narrows. VR may well give us the tools that we need to support new ways of working which have emerged due to the pandemic. We have all adapted to Zoom calls and teleconferencing as the new normal but, are we ready for the next new normal? We think so.

“Virtual reality was once the dream of science fiction. But the internet was also once a dream, and so were computers and smartphones. The future is coming”.  -  Mark Zuckerberg